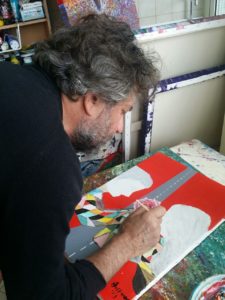 Stefano Balzano was born in Barletta in 1954. He lives and works as doctor in Barletta.
At the beginning of his activity, he was inspired by Giuseppe De Nittis and realized impressionist artworks where the sea, with its iridescent and bright colors, was the privileged subject. In the portraits, the artist draws inspiration from Amedeo Modigliani. At this moment, Stefano Balzano looks at Vasilij Kandinskij, for the musicality of the artworks, and at Henry Matisse, for the luxurious element. After a short symbolistic period, Balzano was in influenced by the colors and the surrealistic mark Van Gogh’s artworks and of Claude Monet’s Ninfee. In the lasts years, Balzano ranges from Mark Rothko’s Abstract Symbolism and from Jackson Pollok’s Action Painting and elaborates a personal language that complies with the intrinsic musicality of colors that can transfer instinctively and spontaneously his emotions on canvas rather than the criteria of beauty and truth.